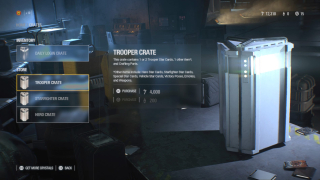 One of the great problems of trusting the invisible hand of the market is that unseen fingers don’t know when to stop taking. Thus the loot box, or gacha, after the Japanese name for capsule machines, which began as a monetisation option in free to play games, and swiftly emerged as something far more sinister: a means of squeezing yet more money out of players who have already paid a substantial up front fee to play.

What possible justification beyond blind greed could there be to weigh Star Wars: Battlefront 2 so heavily towards loot box payments when punters had already forked over $60 to buy the game? Bad publicity over the issue lost EA some $3 billion from their stock value, but the company still declared record annual revenues of $5 billion that fiscal year. Forecasted sales were 10-14 million for the release quarter, the actual sales were around 9 million units. The players largely let them get away with it.

If I were to say that loot boxes are inherently immoral, this claim would fail to impact owing to our lack of agreement as to where - or even if - moral foundations are to be found. But if I were to say the cybernetic qualities of loot box economies inherently distort our perceptions of value, inducing greed in those who operate such schemes, and lust for acquisition in those who encounter them, is this not a moral claim, and what is more, a true claim at that? The comparison with gambling is not the relevant point here, although that industry too is wont to engage in distortions of value... No, the trouble with loot boxes is simply that they work far too well at encouraging avarice, so much so that even those who unleash them are sucked into the resulting quagmire.

Yet if these ‘surprise mechanics’ (as EA would spin them) are ultimately akin to capsule machines and trading cards, are these too to be held in suspicion? Certainly the difference is primarily one of degree, but there is also a difference in kind to consider: digital items are entirely imaginary, and so it is possible to ‘give’ someone loot boxes and then ‘invite’ them to pay to open them. This wilful distortion of our sense of possession is almost as much of a marketers dream as getting people to pay their own money to buy a personal robot storefront, as Amazon recently achieved. It is one thing to offer a lucky dip, and quite another to ‘give’ a locked box as a ‘gift’ and then offer to sell the key.

If the redeeming feature of the free-to-play model in games is that it permits the wealthy to subsidise the games of the poor, loot boxes only share in this defence when the game itself is given away free. Expecting players to pay a substantial upfront fee and then squeezing them for more cash afterwards is akin to the business model of the loan shark.

A Hundred Cyborgs, #72, part of a ten part mini-serial on Gamer Cyborgs.