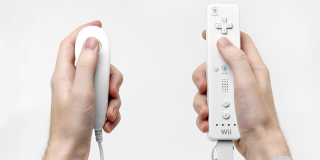 When Nintendo developed the Wii remote, it was with an eye to addressing the problem no other console platform had even been willing to admit: that the standard twin-stick, multi-button controller was utterly confusing and off-putting to players in the mass market who would play games if only they knew how. So there’s a certain irony that in giving Sony the impetus to develop the Move controller (in keeping with Sony’s long-running copycat policy with respect to Nintendo), Nintendo were making the first generation of a control mechanism destined for VR.

Conventional joystick controls don’t work with VR: players have been taught to move the camera with the right stick (another Nintendo invention, refined by Sony), but with a VR headset you look by moving your head. The clash between the two control mechanisms is a huge barrier for VR game developers, one that requires new control mechanisms, ones that almost inevitably bear into motion control (or motion tracking) territory. These companies are seeking a holy grail I confess I don’t quite believe in, but I admire their tenacity and willingness to experiment all the same.

It will sound strange to ask about the moral and behavioral dimensions of a control technology, but as I discussed previously with the joystick, there are excellences and virtues made possible or rendered into new forms by the relationships between games and their control mechanisms. The Wii remote, for instance, opened up social play dynamics - especially between the very young and the very old - that were either not available or at least more awkward to arrange previously. These social opportunities were new positive human possibilities that were opened up by motion controls. Yes, you could take your grandparents bowling, but Wii Sports made that possible in the home and the old folks home, without having to drive somewhere. That in itself was a valuable contribution to human life, for all that the barrier in this case - distance - was also created by the half-blind adoption of new technological means at the turn of the twentieth century (namely the automobile).

But what of the potential for motion controls in VR...? Here, it is far from clear what the moral or behavioural gain might be. As I already discussed, the typical criticism levelled against VR is the largely unjust assumption of its power to isolate. Improving motion controls seems to play into that trap, removing a barrier than currently holds it back from encouraging greater or longer engagement. And yet do we really know what we might do together in a less-flawed stereoscopic virtual environment? Perhaps we can afford to explore this path a little further before prematurely supposing it will increase the metaphorical distance between us. Motion controls have thus far been a boon. Let us hope they will continue to be so.

A Hundred Cyborgs, #74, part of a ten part mini-serial on Gamer Cyborgs.