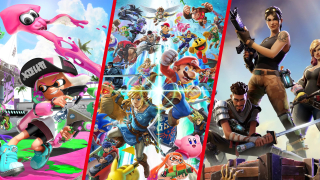 The world of online play is the collision of more strangers than anywhere else today - even social media requires a tenuous chain of connectivity between the people the messages are shared between. In a contemporary online game, the only criteria for encountering another player is that they happened to want to play the same game at the same time as you.

If you judge the advent of online play in strictly utilitarian terms, it appears entirely beneficial, ‘useful’, as we say. But precisely the nature of the pieces in A Hundred Cyborgs is to doubt that utility is an adequate sole assessment of value. Once we start considering the moral and behavioural aspects of online play in detail the situation becomes hugely complex - and resistant to any simplification beyond the criticism remarked in #60 Multiplayer that online play serves to funnel more money to fewer participating organisations.

When I reflect upon my own experiences in online games, I have on one hand the endless accusation of being a “faggot” in Killing Floor because of the apparently shocking transgression of wanting to win by smart strategy instead of (as apparently was considered mandatory) wildly running in together to die. And yet playing Fortnite, I have encountered a tremendous willingness between players to help despite the underlying play activities being extremely similar to Killing Floor (move to the next point; shoot everything not on your side). I don’t know if the difference here is the ages of the players (Fortnite skews much younger), or the volume of players in the community - the more dedicated players of Killing Floor, perhaps, were more set in their ways, and not willing to allow for deviation from their expectations. But Fortnite, I’ll admit, surprised me and overturned my largely negative expectations.

The diversity and complexity of online play is such that it resists analysis except at the level of the bluntest critiques. So against this, I would like to share a single anecdote that may not be common or typical, but its very possibility speaks of a potential unlocked by online encounters. Someone I know had fallen into the dark well of depression, and had become effectively trapped inside his own home as a result. Yet he struck up an unlikely friendship with a fellow with learning disabilities who played online. By helping his new ally to play games online, my friend ameliorated the worst ravages of his own dark thoughts, while his fellow player received aid and companionship. This would not have happened without the neutral ground of online play to make it happen. A depressed person does not seek out ways to act for the benefit of anyone, least of all themselves. Yet through the mechanics of online encounter, something doubly worthwhile was brought about. That very possibility is, in itself, part of the positive moral potential of online play.

A Hundred Cyborgs, #77, part of a ten part mini-serial on Gamer Cyborgs.