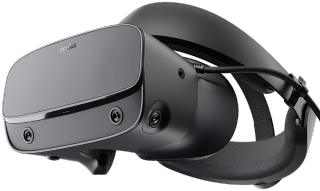 In his song, Total Entertainment Forever, singer-songwriter Father John Misty expresses a popular anxiety about so-called ‘virtual reality’ in the lyric: “Bedding Taylor Swift every night inside the Oculus Rift”... Clarifying his point in interview, he stressed that he can think of nothing more emblematically horrible regarding contemporary technology.

My perspective upon VR is radically different from the popular view as it is in no way symbolic of ‘the future’ to me. Perhaps because I played videogames with second generation VR in the early 1990s (especially the BattleTech VR at the Trocadero in London), VR feels less new to me, and more like an iteration on familiar principles. Just like videogames in general, really. The third generation fixes the weight of the headset, which is notably less neck-crushing now, but the motion sickness issue isn't something that can be fixed, although it can certainly be mitigated. If we want an honest appraisal of the moral and behavioural impact of VR, it would either have to be entirely neutral (which does not absolve individual works from separate assessment) or we could make the positive point that players of VR games and experiences are less likely to engage for long periods because it is a less comfortable activity than its obvious alternatives. But these kind of limitations are completely absent from the popular concerns about VR.

Honestly, critics of VR buy into the stories circulated by advocates of VR as to it being “more immersive”. But immersion is not synonymous with greater sensory fidelity - and indeed, the greater the simulacrum of human senses, the deeper the uncanny valley and the more likely that small discrepancies rupture the imaginative experience. Thus the immersive benefits of stereoscopic vision are completely undercut by the vast limitations in control schemes. This is a theme to be picked up next time. The general warning remains the same for all media: never assume we are in danger of being swept away inescapably into a virtual world, because all our experiences - even of the real world - are ultimately imagined. Real and virtual are not opposites, but rather different names for the closely related ways we interpret experience.

A Hundred Cyborgs, #73, part of a ten part mini-serial on Gamer Cyborgs.