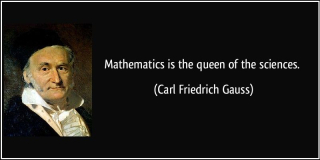 The German mathematician Carl Gauss called mathematics “the queen of the sciences” and Galileo called it the language of the universe – but could we call it a technology? A short, non-exhaustive Google search turned up a 1998 paper by Keiko Yasukawa who was primarily interested in the question from a numeracy standpoint. From her final paragraph:

Numeracy for a sustainable society has to be much more than maths in context, and criticism of other people’s maths. It must ultimately be about building numerate discourses across different [groups].

But this offers little perspective on how mathematics aids or hinders humanity as a technology.

For many people, mathematics is that thing you do with numbers. In reality, it is an enormous, constantly evolving subject from which new concepts spring every year, the applications of which are rarely obvious at first. The square root of -1, the “imaginary number”, turns up in electrical engineering. Group theory, which is essentially an analysis of addition, turns out to be important for encryption and crystallography. Who knew.

Without mathematics, there are no cars, no computers, no internet, no trips to the Moon and definitely no videogames. But mathematics is no unalloyed good.

The finely-balanced mathematics of nuclear fission can be harnessed to produce efficient energy... or a bomb to kill tens of thousands. Fluid dynamics helps us build better planes and safer harbours – but it also enables the military drone that performs messy, remote executions. Still, this is mathematics merely acting as an accomplice. If we’re looking for where the mathematics-human cyborg causes direct harm then we should turn to statistics.

Stock market “quants” concoct models to generate profit, but also follow them blindly into disaster – belief in a single, misapplied equation brought the financial industry to its knees in 2008. It turns out even “the smartest people in the room” will follow the herd.

Humans are not made for the subtleties of probability and while this makes for baffling conundrums like the Monty Hall Problem, it means those well-versed in statistical rites can use them against others. Consider the gambling industry. The relatively recent wave of gambling machines known as “fixed odds betting terminals” are particularly brutal, encouraging rapid betting while projecting an illusion of control. Their owners make a consistent profit while the gambler’s instinct tells them their losing streak will end soon. Spoilers: it rarely ends well for the gambler.

But if we look at the COVID-19 calculus, we see not just a problem of misunderstanding statistics, but trust. While first-affected countries warned about the impact of the coming pandemic on health services, others appeared to deal with these warnings as mere hypotheticals. And once authorities were forced to impose quarantines, every minor stumble in a rising case count is interpreted as a sign that maybe the crisis is over and we can all go out and enjoy the sun.

It seems Keiko Yasukawa’s paper was important after all. A society bound together by mathematical technology surely requires a decent understanding of it.

A Hundred Cyborgs, #81 by Joel Goodwin, a part of All-Comers April.