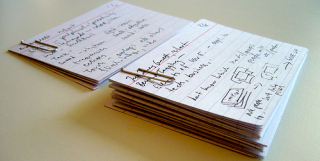 Arguably the most sophisticated form of note-taking is the Zettelkasten system developed by the German sociologist Niklas Luhmann in the 1950s.

Zettelkasten means "box of notes" and is designed to reliably produce good new ideas and make final deliverables (essays, articles, and so on) painless to create.

Key to the Zettelkasten method is the use of cards to store individual thoughts which are uniquely identified and linked together by tags. Cross-referencing with tags eliminates the problem of where to put a note and allow related ideas to intertwingle and structure to emerge organically rather than having to be imposed.

Indeed, Luhmann's career output (some 70 books and 400 articles) suggests that such a system of note-taking can be a powerful tool.

However, while note-taking itself is already a crucial part of our cyborg heritage, digital note-taking opens up exciting possibilities for what a note-system can do for us.

If nothing else the scale of information a digital system can manage dwarfs any physical system of notes. Further, once data is digital, it is possible to create new connections, to re-arrange, and to transform it in ways difficult to imagine in the physical realm.

At its simplest, a digital note is an analogue of a paper note, i.e. a stream of text, perhaps formatted. There is an explosion of applications today for organising this kind of note. The most popular of which is probably Evernote which is like a "digital file box".

However, the use of folders for structure creates a "Where do I put it?" problem since a note can, typically, only exist in one folder. It is a problem common to such applications and, a problem that's worsened the more information you store.

By breaking the limitations of folder structure, digital notes truly become a system for interconnected thoughts and, as such, eminently suitable for creating a digital-Zettelkasten. Tools such as Roam and TheBrain follow this approach and consequently emphasise the creation of a fine-grained web of thoughts.

By breaking the limitation of note-as-stream-of-text, digital notes become structured such that they can be processed with software and more easily combined and remixed into new forms. Applications such as Tinderbox and Mentat allow notes to be processed by software agents to solve more complex problems.

For example, to know a note represents a question and to look among notes which are facts for possible answers. Perhaps even to self-organise views of such information.

While we are in still in the relative infancy of digital note-taking, it is a time of great promise and tools are emerging to help us build databases of what we know that the writer Tiago Forte calls a "second brain". If what you know, or could know, is essential to you, there is no better time to pick a tool and get started building yours.

A Hundred Cyborgs, #86 by Matt Mower, a part of All-Comers April.