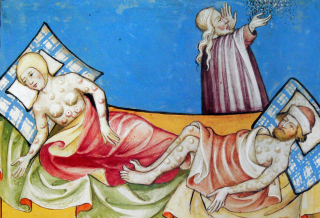 People walking around with masks over their faces, many unable to leave their homes. Millions dying. Between 1348 and 1351, a third of the population of Europe died as a result of the Black Death. Not only was there no vaccine against it, there was not even the concept of a vaccine. Yet there was one other vital difference between those alive in the Middle Ages and those of us alive today: they were prepared to die. They were just as afraid of dying as we are, but as Ivan Illich has stressed, prior to industrialisation everyone accepted the inevitability of death as the unavoidable fate awaiting everyone ‘when their time came’.

Vaccines were only a part of the transformation of our approach to life and health in the nineteenth century, but they marked a seismic shift in our response to infectious diseases. Suddenly, miraculously, it was possible to prevent illness by beating it to the punch, becoming mildly sick in order to develop an immunity that would prevent the worst ravages of a micro-organism. Disease, it suddenly seemed, could be defeated. And along with vaccines, there came surgeries, antibiotics, myriad drugs - so many amazing medical techniques... so many, in fact, that rather than everyone accepting that they must eventually face their own time to die, now people are willing to sue doctors for not putting their 90 year-old relative on a ventilator. We now behave, insanely, as if we could live forever if we just get the right treatments, as if we are merely machines in need of intermittent repair.

Until recently, vaccines were a focus of attention because of opposition to vaccination. Much of this resistance springs from misunderstandings: yes, the vaccine will make you sick. But that’s precisely the point: build immunity to a mild infection to protect against a worse one. But we don’t like to admit that, despite the obvious blunders, anti-vaxxers might not be mistaken when it comes to distrusting medical corporations to have our best interests at heart. The market for vaccines is worth $35 billion - and that’s less than 5% of what pharmaceutical companies make overall. With this much money up for grabs, what kind of corporation is going to pause and impartially consider where the limits of medicine ought to lie...?

Vaccines can ‘defeat’ a disease - yet disease and death remain the inescapable cost of living. Being a vaccine cyborg is sold to us in the terms of warfare - “the fight against coronavirus”, “eradicating the disease”, “help us defeat the virus”. I can imagine the landowners of the Middle Ages making similar claims about the protection they were affording in return for taxes, albeit in literal terms of invasion and rapine. Yet of course, that ‘protection money’ was used to instigate literal war - in the centuries preceding the Black Death, the Crusades were funded, ultimately, by taxation. Sooner or later, you have to look a little deeper into the arguments and actions of those we are paying for protection.