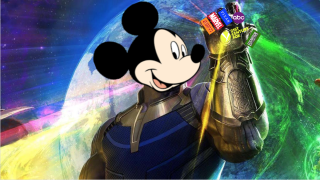 Have you paid your Disney tax? Chances are you have at some point, and it’s quite likely you do so every year, to an ever-increasing degree. Every time you pay to watch a Disney or Pixar movie, every time your kids get Spider-man underpants, whenever you watch The Mandalorian or Family Guy... one way or another, Disney gets its cut.

We talk of ‘tax’ in a situation where we contribute money to an organisation (usually a government) to contribute to the cost of providing public goods, and where force may be used against us if we refuse to pay. Paying Disney, directly or indirectly, for entertainment doesn’t look like a tax, in that it seems like we could opt out of paying by refusing to watch (or buy branded merchandise from them). But when you participate with anything from Disney, Pixar, Marvel, Star Wars, Avatar, Aliens/Predator, The Muppets, The Simpsons, Family Guy, Indiana Jones, Pirates of the Caribbean, Winnie the Pooh, or Grey’s Anatomy, guess what... directly (via cinema ticket, home media, or merchandise purchase) or indirectly (via streaming subscription fee or advertising revenue) you paid your Disney Tax.

Two objections to characterising your contributions to Disney’s revenue streams as a ‘tax’ are worth discussing. Firstly, entertainment is not usually considered a public good, that is, something we all benefit from. But government taxation also pays for things that are not public goods (like murdering civilians with drones, or politician’s pensions) or that have debatable status as public goods (arts funding, for instance - which not everybody values like I do). Secondly, that Disney is not able to bring the force of law against you for refusing to pay your Disney Tax. Yet if you participate in Disney’s vast IP catalogue without paying the tax - perhaps by copying files from the Black Library, or marketing a knock-off DVD, they can indeed bring charges against you. Even so, I freely acknowledge that this is a ‘tax’ primarily by analogy to government tax - it’s just this particular analogy does not have very far to travel.

It is not my intention to defame the work that the Disney corporation performs in the entertainment space. But here is another case of the shallow-sightedness I discuss in The.Virtuous Cyborg, our widespread ignorance of the networks we are enclosed within. And in this case, our continued involvement in paying the Disney Tax permits Disney to do the other thing it does so well: buy yet more intellectual property, to ensure a greater Disney Tax next year. Try going a year without Disney getting a cut of your entertainment time; if you have kids, try going three months. The fact that the tax analogy is barely a strain on our imagination is a sign that Disney’s commercial presence in our lives approaches comparability to a lesser form of taxation. This is not a monopoly in the conventional sense of the term... merely an inescapable competitive advantage that grows greater and greater with every passing year.

Hi there,
Since NHK is the public broadcaster for Japan, this is the equivalent of the TV license in the UK, that funds their operations. I don't have a problem with paying for public television this way - mind you, I find it cheeky that having used our money to produce media, the BBC reserves rights on that content and does not provide it to us (who paid for it). But that's a different problem. :)

The chief issue with the TV license in general is not the idea of paying for public TV (better this than what NPR does in the States...), but the extent of the prosecution powers applied for non-payment. There was a point in which the majority of women in jail in the UK were there for not paying their TV license. In this regard, the NHK approach actually doesn't seem too bad!

All the best,
Chris.