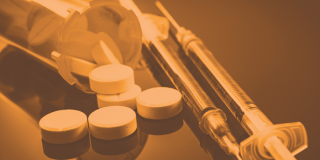 We tend to think about legal vs illegal drugs - forgetting, it seems, the harms caused by (legal) medication, alcohol, or tobacco, and the good that unexpectedly comes from (illegal) intoxicants. One sensible constraint applies to all drugs, medicinal or recreational - moderation. Those drugs that cannot be used in moderation, such as heroin, crack cocaine, or meth, set the interpretive pattern that tars illegal drugs with the same brush. Yet it is legal drugs - paracetamol (acetaminophen) and alcohol - that cause the majority of fatal health problems, mainly via liver damage, and tobacco is not far behind.

Because ‘drugs’ are so broad a category, it can be hard to make general moral or behavioural claims about the many different kinds of drug cyborgs. But as my earlier discussion of pubs (cyborg #45) suggested, the unseen benefits to drugs lie far more in the community they foster and support than in their individual effects - at the level of the individual, we can say nothing more than ‘stick to small doses’ or abstain entirely (again, regardless of whether the drugs in question are legal or illegal). But what interests me about the cybernetic networks surrounding drugs of all kinds is the potential for them to develop into communities of care.

As a small example, in the UK, US, Denmark, France, and the Netherlands I have encountered networks of people bound together by their sharing of modest amounts of marijuana. Sometimes this occurs illegally, as a friendly distribution network, but at the level of those at the bottom of the network there are none of the movie-style organised crime cliches (although gritty stories occasionally drift down the supply chains...). Sometimes, as with Freetown Christiania in Copenhagen, it occurs in a legal grey area, with the residents not only providing hash or bud that is illegal by law but also fairly-priced food and accommodation for about a thousand residents in an ‘anarchist commune’. In the US and the Netherlands I have also seen it from inside the law, with cafes (coffee shops) and retail establishments providing the point of supply, and once again a community of support maintained, although often less intimately than when the community is bound together by the need for a certain discretion in their activities.

No such community of care exists, however, when (legal) drugs are purchased from a supermarket. Rather, a small health warning label on alcohol, tobacco, or painkillers - and in the latter case, warnings rarely or never read, despite widespread negative health effects (in terms of liver damage) dwarfing those of all illegal drugs taken together. I am forced to suggest not only that we should avoid being distracted by the legal histories in the case of the various (legal and illegal) drugs when we wish to assess their moral and behavioural influence, but further to ask whether what we have declared legal is in any way the innocent side of the fence it is so often assumed to be.