Welcome Back to the Green Room 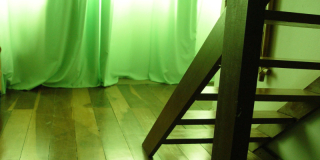 Every time I finish a campaign at Only a Game, I like to say that I have 'gone to the Green Room' i.e. written a post to mark the end of the collection of themed of essays. We were first there in September 2006 for the Metaphysics Campaign, then again in February 2008 for the Ethics Campaign that ran for nearly a year, then there was a long break until the two-year epic that was 100 Cyborgs, which finished up in the Green Room in August 2020. Now here we are again after the Magical Science Campaign, a 16-month affair that started as just a few remarks about pseudoscience, and ended up a critique of the dire state of scientific discourse and the damage caused by this collective failure.

In the early days, when blogs were still a lively source of community, I'd have more than fifty people to thank for their sustained engagement; nowadays I'm lucky if I get a single comment to any piece. However, it has not been a complete comment-desert this campaign and I would like to extend grateful thanks to Chris Billows, Babette Babich, Ian Tyrell, Ari Cheslow, José Zagal, the Reverend Ian Tattum, Nicholas Lovell, Rob Briggs, Sree, Nathan Frost, Tobias, Joaquín Ágreda, Thomas Olsen, Michael Pereira, Psuke, Erlend Grefsrud, Rob Hewson, Anwen Fryer Burrows, Yehuda Berlinger, Sébastien Chaume, Sean Payne, Paul Gestwicki, and the always excellent Matt Mower, along with anyone else who shared their thoughts at some point in the proceedings, either here or in the culture battleground that is Twitter.

That's all from me for now, as I will be off on my Social Media Break next week, with my last connected day being some unspecified point before 5th May. In the meantime, I leave you all with my unlimited love and respect, and please do drop off a comment in the Green room if you found any part of the Magical Science campaign engaging, thought-provoking, or illuminating.

The game continues later this year.