The Beautiful Closed World of Shenmue III
Encounter at Farpoint, Part One

This post carries an unusually high risk of cognitive dissonance, and perhaps should not be read by anyone. 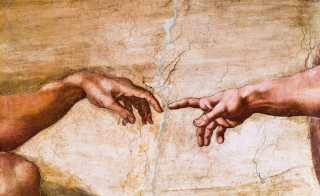 I want to talk about a schism. It doesn't really matter when it begins, but let's suppose it starts with David Hume in 1739, because it amuses me to kick off this story in Scotland. On the one hand is the faction for whom God is a word that must not be spoken in vain, which is to say, as profanity. On the other is a faction that, by the twentieth century, discovers its own sacred word. I try not swear on this blog, but the sacred word of the breakaway group is the one that Father Ted uses 'feck' as a substitute for. And this word isn't one that must not be spoken as profanity - it is one that people must not be prevented from speaking as profanity.

This is the Godfork - the schism into 'Team God' and 'Team Feck'. Don't make the mistake of thinking that this is Christianity versus atheists; its true that the majority of atheists are on Team Feck, but there are significant numbers of Christians on both sides. The God side stands for order and tradition - Kierkegaard called this faction 'Christendom', and denied that it was following Christian teachings, but that argument is a rabbit hole best avoided for now. What matters is the fork, the division into God and Feck and the convictions that flow from this point onwards.

Take Israel versus Palestine, an international political crisis for 74 years and counting. Team God sides with Israel, while Team Feck sides with Palestine. Ironic, really, as both sides of the Godfork are prejudiced against Muslims... this is, after all, a schism in Christendom (which now includes anti-Christendom). Then we have abortion, which has been a political crisis since Roe vs Wade in 1974, 48 years of metaphysical commitments to the unborn vying with incompatible commitments to the autonomy of women. The following year, we get 'global warming', which by 1989 has aligned with the Godfork - Team Feck being increasingly sensitive to the atrocious environmental damage our species causes, and Team God having immense historical and economic ties to the vastly profitable oil industry.

Then we get to vaccination. Don't be deceived by the retrospective histories that get told here (although it is true that political issues surrounding vaccination go back to the first vaccinations). The term 'anti-vaxxer' first appears in 2001, and this time it is Team Feck siding with the corporations, in this case, the pharmaceutical companies. Isn't it comforting to know that whichever side of the schism you align with, you will eventually be required to prop up capitalism...? Capitalism, after all, is only a secular name for Christendom i.e. colonial Europe's dominant culture, and now globalism's only permitted culture. By 2020, this dimension of the Godfork is turbocharged by the so-called non-pharmaceutical interventions (face masks and lockdowns). Ironically, since Team God are the sceptics in this aspect of the schism they become the cynics, while Team Feck become the zealots, an inversion of the usual roles played. But don't think for one second the Godfork is about scientific truth, equality, or anything else so noble and principled. All the way down the line, it's just rival teams taking up opposing commitments. In the US, the schism is helpfully colour coded: Red for God, Blue for Feck. Pick a team, pick which multinational corporations to support.

But something unusual has happened in the last decade or so: the Godfork is splintering further... Team Feck are no longer united. They have divided into those who take 'woman' to be matter of biological sex, and those who take 'woman' to be a matter of existential identity. Neither of these correspond to the position of Team God who still take 'woman' to be a question of gender, even though their collective memory is too short to remember what 'gender' used to mean, before the 18th and 19th century destroyed the old gender regime and replaced it with the alignment of sex and gender and the instatement of a new patriarchal political hierarchy. Likewise, Team God is breaking down into new factions. The folks who for a very long time were committed to censorship in the form of outlawing blasphemy and obscenity are now breaking into further factions over the question of free speech.

For the first time since the schism began, new and previously unthinkable alliances are possible. Classical lesbians ally with the very conservatives who shunned them in the late twentieth century: both share a metaphysics of sex and gender opposed to the existentialist tenets of their 'genderfluid' political opponents. Free market capitalists unite with their old opponents who march under banners of environmentalism, cultural diversity, or both: they share a commitment to liberal democracy. This new alliance opposes the regime of censorship emerging from Big Tech's freshly minted coalition with the pharmaceutical corporations. The uniformity of the old factions lies in flux.

The schism I am calling the Godfork dominated the political landscape of Europe and its colonies for three centuries. But the old ways are breaking down... there is now a tremendous opportunity for unprecedented change. Many paths diverge from this turning point, and our old convictions are just as likely to betray us as to guide us wisely into the future. It is time for us to embark upon a new journey, yet the path ahead still remains unknown. We can perpetuate the cultural wars the Godfork has bequeathed us, or we can set forth on a bold adventure together. All that matters is the destiny we have yet to forge: shall we choose peace, or will we prolong the war...? This monumental choice is ours to make together.

That was more upbeat than I was expecting given the warning.

Ha, well I'm probably giving more warnings than I used to these days because everyone seems to flip out at next to nothing(!) And I really thought this one would provoke some backlash, although it really didn't.