An Abundance of Useful Idiots

May contain traces of snark. 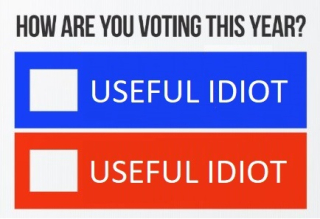 The accusation that someone is a 'useful idiot' is one we deploy against our political opponents. As a result, we miss all the ways that we ourselves are the most useful of idiots - because in seeing stupidity always in others and never in ourselves, we are easily manipulated for agendas we simply refuse to recognise.

Pick a political topic, find a useful idiot on both sides. Immigration? Support open borders to provide cheap labour for industrialists, or tighten border controls to provide lucrative business for organised crime and security contractors. Taxation? Support high taxes to give more money for government to squander on crony-staffed NGOs, or support low taxes to help millionaires avoid paying their share of infrastructure overheads. Abortion? Provide an effortless power base to red-team politicians who can do what they like because your support is baked-in, or do the same for the blue team on the other side - either way, once you are polarised on this topic, you are politically neutered because this issue on its own ensures your vote.

It is always those terrible others who are the useful idiots. We are incapable of seeing ourselves this way, for we are oh-so-good and oh-so-smart. We know climate change is the big environmental issue, so we make the awesome sacrifice of paying extra for an electric car that will somehow reduce carbon dioxide emissions even though the electricity that it runs on comes primarily from power plants that emit vast amounts of carbon dioxide from burning fossil fuels. Best not to look into the environmental impact of lithium mining for the batteries used either, nor at the road safety implications of vehicles that offer far swifter acceleration, but are largely invisible to blind people.

And don't get me started on the useful idiots on either side of vaccination... Are you one of those extremely useful idiots who have helped pharmaceutical companies cut safety testing down from ten years of openly available data to 'we promise it works'...? Or one of the even more useful idiots who prevent medical professionals raising the alarm by insisting upon grand conspiracies about depopulation and mind control because you just couldn't resist grandiose mediocrity...? A more perfect example of bilateral idiocy serving the needs of the rich and powerful there may never have been. If it was revealed tomorrow that Pfizer had invented the term 'anti-vaxxer' as a marketing ploy I would scarcely raise an eyebrow.

The nature of political partisanship is that some proportion of the wealthy and powerful stand to benefit from any issue in the form you are likely to encounter it. This subtle qualification is critical, as there are indeed issues that are not a source of bilateral idiocy. Proposals for paying owners of forest lands fees for environmental services, as happens in Puerto Rico, is unlikely to appear in the mainstream media. Neither will coverage of road accidents, despite these killing 1.3 million people globally every year, many of them children. No matter what the benefits in terms of saving lives or reducing environmental impact, stories that hurt large financial interests (e.g. that make the automotive industry look bad) will simply not get covered. Because the news media know which side their bread is buttered, and its not you providing their bread or their butter.

Unless you support politically marginal topics or belong to an inconsequential faction like the remaining Marxists, its a virtual certainty that you are a useful idiot. Your strongly held political convictions have been fed to you by media lackeys who like you are in mindless thrall to the big commercial powers - whether business, government, or (as is increasingly the case) both together. And the beauty, the horror, of this scheme is that once you are successfully triggered by any one of these fault lines, you are effectively neutralised as a participant in any genuine kind of democracy or politics, because your vote has been captured.

Authentic political existence is a difficult conversation about how we shall live together. The moment you accept instead the temptation to channel your hate and outrage as one of these pre-packaged useful idiocies, you are merely propping up the powers that be. Tragically, it is solely those who can afford the immense cost of sponsoring the news who determine the allowable kinds of idiots. All we get to do is decide which kind of stupid we want to become.

Thanks for your comment '..', very wry! I begin to suspect that voting is a tool for political action only when we organise ourselves for that purpose. Thinking that voting on its own is participating in political life is mere deceit. The discourse about how we will live together is far too important to be left to politicians.