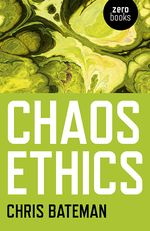 Balance has no meaning for a politics that is merely the continuation of war by other means. Both religious zealots and defenders of scientific fact declare a monopoly on truth and the moral law, while radicals are powerless to resist since they have lost faith that ethics can be anything but arbitrary. Meanwhile, insane bureaucracy devastates life while nations fall into dishonor as they abandon their promises of justice.

If the moral law cannot save us, perhaps it is time to try moral chaos.

Chaos Ethics collides philosophers such as Kant, Nietzsche, Levinas, Mary Midgley, Alasdair MacInytre, Alain Badiou, Isabelle Stengers, and Bruno Latour with everything from cyberpunk science fiction and the fantasy novels of Michael Moorcock to Google, gay marriage, drone assassinations, and the ethics of cats and dogs. A strange and wondrous journey through morality viewed as a facet of imagination that offers a new perspective in which the diversity of ethics is a strength not a weakness, hesitation is more noble than certainty, and virtue can be expressed in both law and chaos.

“A revelatory reading of both my own and other's work - a genuine philosophy for the 21st century.”

“An elegant yet passionate defence of ethics, the book carefully considers various conflicting accounts of what it means to live a good life before settling on imagination and narrative as chaotic and transient foundations of ethical thinking. Ethics for Bateman is both necessary and necessarily tumultuous; it is also a story which we should try and tell as best we can. Thought-provoking, engaging even if at times controversial, Chaos Ethics is a pleasure to read - and to agree and disagree with.”

"A book that’s badly needed and could be revolutionary.... This matters; read it!"