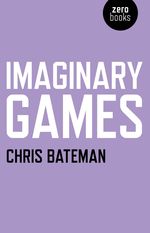 Can games be art? When film critic Roger Ebert claimed in 2010 that videogames could never be art it was seen as a snub by many gamers. But from the perspective of philosophy of art this question was topsy turvey, since according to one of the most influential theories of representation all art is a game.

Kendall Walton's make-believe theory explains how we interact with paintings, novels, movies and other artworks in terms of imaginary games, like a child's game of make-believe, wherein the artwork acts as a prop prescribing specific imaginings. In this view there can be no question that videogames - in fact, all games - are indeed a strange and wonderful form of art.

In Imaginary Games, game designer and philosopher Chris Bateman expands Walton's theory to videogames, board games, collectible card games such as Pokémon and Magic: the Gathering, and role-playing games like Dungeons & Dragons. The book explores the diverse fictional worlds that influence the modern world, the ethics of games, and the curious role imagination plays in everything from religion to science and mathematics.

What People are Saying About Imaginary Games...

"A wonderfully refreshing and inventive look at games of many kinds, but especially digital games. It is seriously philosophical, but Bateman, a professional game designer, draws on a huge variety of resources far beyond the writings of academic philosophers - fascinating and fun!"

"Chris Bateman’s Imaginary Games may just do for videogames what Noël Carroll’s The Philosophy of Horror did for scary books and movies.... not only philosophically compelling and interesting; it is also a great read. Bateman’s fluency in the relevant philosophical debates and history of thinking about games is both enviable and a pleasure to behold."

"In this well-researched book Chris Bateman explores the ambiguous territory between the fictional and the real, and slays some dragons hiding therein. Highly recommended."

Thanks for adding me on twitter and remembering me to dig your creations
Will stop my Hive discovery partly,to read your work since it will inspire me so much in my project.

Boughrouck - nice to "meet" you boughrouck! Hope you enjoy the books and blogs!