Somewhat sleep deprived on account of our new circumstances, namely little Soren Albert Bateman. There's a picture over at The Lotus Window, along with a short birth story for those who are into their baby stuff.

The Game will resume next week and we'll get straight back into the Fiction campaign - lots of fun stuff coming up, so watch this space!

My wife’s due date was yesterday, and I think it might be best if I declare my paternity leave now, rather than having to tie up the blog when my son finally decides to make his appearance. I’ll aim to be back on or shortly after the Feast of St. Hoochie (February 15th) with lots more nonsense as the Fiction Campaign continues…

Update: Still no baby as of February 11th so I'm going to need a little more paternity leave than expected; let's say March 1st. That should to give the little blighter enough time to emerge and settle into the world. 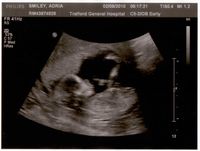 My wife and I have finally collected enough experience points to add a new member to the party; the upgrade should be complete sometime around 31st January 2011. The new kid (a boy, if the sonographer is correct) is already practicing his martial arts by kicking the hell out of my wife's belly from the inside. It will be our first, or at least our first human child, since we adopted a black Labrador puppy a year and a half ago who is already a beloved member of the party. I vouch not to deluge the Game with endless photos of the wrinkly newcomer (pictured left at minus 26 weeks old), on the basis that all newborn babies are indescribably ugly except to their parents. (Although at least one image, perhaps, may be unavoidable).

Wish us luck –we're going to need it!

PS: We tried to tell you and your lovely wife face to face, Peter, but alas you were consistently unavailable!

It is with a touch of disappointment that I report that my wife and I will shortly be crossing the Atlantic ocean yet another time in order to live on the European shores once more. There are good reasons for us to move back to Manchester, including the fact we have property there, and a slew of new and exciting projects with European clients, particularly our friends at 3D People. But still, I have enjoyed my year in Knoxville, amidst the greenery and sunshine, despite developing a certain sense of isolation.

Knoxville, a charming college town on the eastern edge of Tennessee, has been a part of my life since 1997, when a friend's wedding brought me here - and led me to my wife. I appreciate the popular conception that people have of Tennessee, and for the most part it is wildly unfair. It is true that this is a fairly conservative state, one in which a conventional patriarchal version of Christianity dominates, and thus a State which prefers to support Republican over Democrat. But beyond the stereotypes of the majority lies a wealth of diversity, and this truly is a remarkably friendly region, with people who would gladly lend a hand to someone in need.

East Tennessee is the liberal side of the State, with the conservative influence being much stronger in wealthy Nashville, or densely urban Memphis. The Christian Churches here are diverse, and there are two Unitarian Churches, one of which has amicable relations with the local Pagan groups. The Pagans, alas, have been having all sorts of problems resolving tensions in their community recently, which is a shame as at its best it is a wonderfully spiritual counterculture. Many refugees from stale-minded Churches have found a home among the Pagans, although it would be wrong to presume that there are not open-minded Christians here. A friend, who alas recently moved to Cincinnati, belonged to a splinter group of Christians within her own church that explored a less traditional interpretation of Christianity in their Sunday meetings.

A fringe benefit of the strong Christian presence here: my wife and I have been able to do our shopping on Sunday mornings, when the orthodox religious community is in Church. The largely empty aisles make for a refreshingly quiet supermarket trip!

My long relationship with Knoxville is not ending - we shall be back here again, no doubt - but my residency here must come to an end. It is with sorrow that I wave goodbye to our many friends here, but it will be with commensurate delight that I greet the many friends waiting for us on the other side of the Atlantic, where we will arrive at the start of June. Until then, we will be lost between worlds, travelling and visiting friends and family.

Farewell, Knoxville! We shall meet again!

This morning, I was issued my US identity card. Having resisted them in the UK, it's unfortunate to have to get one here, but sadly so engrained in the culture is the automobile that one can do very little without a driver's license. The people here don't even see it as an identity card, although pragmatically, it is used that way. (Also, I must note that the US driving test is really quite laughable compared to the tortures of the British test).

Fortunately, the acquisition of this little plastic card more or less complete the rituals of moving - except for the fact that no credit card company this side of the Atlantic seems to have the courtesy or insight to offer me a UK credit check, and thus I am treated as a person with "no credit" (despite having quite excellent credit). I am reminded of Hannah Arendt's characterisation of bureaucracy as "rule of no-one".

Thus ends (hopefully) the disruption to blogging caused by moving, and normal service should resume on Tuesday. Have fun everyone - and those of us watching the Eurovision Song Contest this weekend, may the most ridiculous band win!

Although the move is far from over (somewhere out in the world are sixteen boxes with the material goods from our former life in them), we have arrived in Knoxville. The view from the top of the hill where the townhouse we are renting is located is nothing but forest and mountains.

Nothing more from me until we arrive in Knoxville... Enjoy your weekend, and I'll hopefully be posting again sometime next week!

Finally, my wife and I will be completing our move to Knoxville this weekend. As a result, there will be further disruption of the blog this week as we tackle packing and so forth around my rather full work schedule. However, within a few weeks of the move everything should be settled down and we can get back to nonsense as usual. Which reminds me, I'll be announcing the start date for the Ethics Campaign shortly.

I have enjoyed staying here in the countryside outside of Nashville, though. There's a groundhog who has moved into a hollow under a tree next to the high-tech log cabin where we are staying, and the hummingbirds flit around the porch swing in an entertaining fashion. We have neither species in the UK, and both are entertaining neighbours. Still, it will be nice to get into a place of our own again.

Off to Knoxville today, and for most of next week, so limited blog service until further notice. On the plus side, we will be househunting, which means the Ethics Campaign is perhaps not too far away now, perhaps we might even start in May. Have fun everyone!

When you watch the Superbowl from the United Kingdom, you are in the minority. Most people are asleep Sunday night by the time the broadcast begins, and so it is a dedicated minority that are drinking beer into the early hours of the morning. This year was perhaps the last time I will experience the Superbowl as a cultish late night drinking marathon. Next year, I'll be watching it as part of the normal US experience... with the added 'benefit' that I will get to see the special Superbowl commercials, which are never shown elsewhere in the world.

My wife and I have known that this move was in the works for a while now, but it has still managed to creep up upon us. It was only in January that we really came to realise that when I fly over to California for GDC this year, I won't be returning to the UK any time soon. I will be an immigrant.

As a result of the move, I expect blogging will be disrupted for the next month or so.