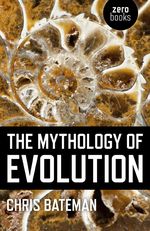 What is the nature of life? Scientists turn to natural selection, genes or adaptation to explain the living world, but the imagery of evolution threatens to distort our understanding of the incredible history of our planet. There is no science without mythology, and the only way to reveal the facts is to understand the fictions.

The Mythology of Evolution exposes seven 'spins' given to evolutionary theory, each resting upon an ideological interpretation of an otherwise neutral idea. There are myths of progress and destiny, such as the ‘ladder of progress’ and ‘only the strong survive’. There are stories magnifying the significance of genes such as ‘the selfish gene’ or ‘kin selection’. There are more grandiose myths such as ‘survival of the fittest’ and the infamous ‘intelligent design’. All relate to a final myth – that of ‘science as truth’.

By liberating evolution from these misrepresentative stories, we can find a more nuanced vision of life that shows how advantages persist, trust is beneficial, and the diversity of species emerges from a refinement of possibilities made possible by a chain of inheritance that stretches back to the beginnings of life itself.

What People are Saying About The Mythology of Evolution...

"A book that’s badly needed and could be revolutionary. Bateman doesn’t just describe evolutionary theories but digs out their imaginative roots. He shows how essential it is to understand our myths properly since myths are not lies but powerful visions that can shape all our perceptions. This matters; read it!"

"This book explores the many ways that extra-scientific metaphors, or 'myths', both color and constrain our view of evolution.  Bateman shows that alternative myths are equally consistent with the data, but present a very different image of the evolutionary process."


"In The Mythology of Evolution, Chris Bateman explains why ID and other creationist proposals are not science. But Bateman also has little tolerance for atheists who use evolution to argue against religion. If you want a thoughtful assessment of where evolution stands as a scientific theory, read this book."


"This readable and insightful work restores sanity and reasonableness to philosophical reflection on evolution. Bateman carefully separates what is illuminating from what is misleading in the various metaphors and myths that have dominated evolutionary discourse... Scientists, philosophers and other intellectually interested readers will profit immensely from reading and reflecting on this thoughtful book."