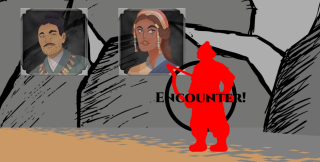 There's a new Silk demo! It adds an inventory bar that shows which goods will be gained and lost in each choice, Exp notifications and level up events, Encounter notifications, new 'treasure' Encounters and a lot of additional sound effects. Download the PC version by clicking the Silk demo 005 link.

We're sending this demo to the publishers who expressed an interest in Silk at GDC, and if we sign to one this might be the last version of the demo we can share publicly, so it's worth taking a look. Many thanks to all the Kickstarter backers who provided feedback - you'll find many of your concerns addressed here.