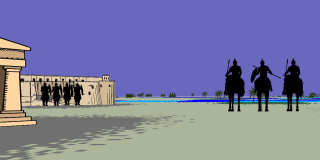 In preparation for the Beta, I've been frantically adjusting the Tasks for the four Destinies (the different modes, objectives, and difficulties of the game, in effect). I have tested the Traveller already, and the Warlord, and am in the middle of testing the Noble now.

I still have to tackle the hardest Destiny: the Rebel, which I know is going to be tough because they have to take on the entire Parthian Empire, and they are seriously deadly. I decided in my last game of the Warlord to go after Parthian Imperial Mints for the final victory... this was a huge mistake! Parthian troops are entirely made of cavalry, and I rolled in with a troop that was mostly made up of Infantry. They made me pay for my mistake!

The Steam page should be up next week, and once we have that we'll look at how to distribute Beta keys. Watch this space!