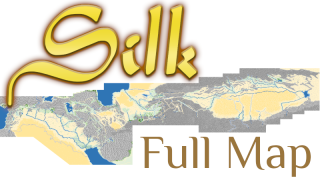 Today, we have released the full landscape map to Silk at 300 ppi. It's intended as a build-your-own map resource (there are no text labels on it), and to help anyone who feels overwhelmed by the scale of the world. Of course, you can make your own version by mapping in the game, but for anyone who'd like it (for any reason), the full landscape map is now available.

If this was the 80s, a magazine would have carried a map for the game by now, so it felt like we ought to put something out in the spirit of the early days of gaming. Note that this map contains geographic spoilers!

Also, thanks to the generous support of the original development team (who have all moved onto greener pastures) we should be putting v1.6 into production this month. This is our first major update in months, and will form the basis for the next console release when we can afford to pay for that.

The following new features are planned:

Alright, so these are notes I made after playing Silk on the Switch (so some differences from the current Steam version, unfortunately).

First off - I enjoyed the game and even if I don't play it again I consider I got my money's worth out of it. That's a good thing!

Specific things I enjoyed included the interaction of a different cultures (like ritegivers interpreting various temples according to their cultures), the voiceovers giving background on various major towns and locations, and the setting in general (I'm a big fan of settings in the Near East).

On the flip side, the biggest problem is that as I mentioned, both of my longest-played games had their save games destroyed, and this led me to be reluctant to spend any MORE time on the game, which is bad.

The first is a known issue, looking at the Steam forums (if you finish a game as the Traveller, continue playing and save subsequent to your final stop at Antioch, the save game becomes unloadable).

The second I am more uncertain of. What happened is that while playing the second scenario (Warlord?), I loaded a save game, realised I made a mistake after it loaded up, and then exited the game (btw, it is a problem that there's no way I noticed to load a game or return to the main menu other than exiting and restarting the game). When I went back in, I accidentally hit new game (this is very easy to do since you can hit the button before the menu actually appears). I backed out of the character choice screen... only to find my save game had vanished entirely.

I'm not certain what happened here. The game had definitely completely loaded before I exited the game to reload (I may even have taken a step first). I do wonder if it's possible that my shaky hands had somehow both selected the New Game option and then deleted my save game before either actually appeared on the screen, but I don't know if that's possible because I don't recall if there's a prompt upon erasing an old save game (and after while I could have created a new character to check this, I honestly felt heartsick over losing this game I had put quite a few hours into and just put the console away). Plus the character in question was in the second slot. So... not sure.

Later edit: After a few days, I did check and find out the game does indeed delete a profile the moment you try to start a new game, and it seems plausible that is what happened (albeit I still am not certain how it managed to delete the second save game). The ability to delete a save game without prompt before the menu actually appears is, while not devastating, probably not ideal?

Some other thoughts I had or bugs I noticed (some of which I realise are more aspirational than realistic to expect from a patch at this point, which is fine):

- It was disappointing to see a game about the Silk Road not include India. Big as it is, I get it, but it's still missing a full half of the routes and a smorgasboard of new cultures and religions to interact with.

- It would probably be useful for the "how to play" section to demonstrate the graphical differences between the different types of dwelling. It almost screwed up my Warlord game because I didn't realise the walled cities with armies weren't "fortresses".

- It would be VERY helpful if the map distinguished between settlements of different cultures with different-coloured dots. It already shows ones you've conquered in a different colour, after all. It'd also be nice if towns, citadels, and fortresses were distinguished, although that might be tricky (maybe in brightness of colour?), as well as major temples from cairns and such.

- Unless you're ignoring the missions entirely, the game (at least in my experience thus far) pushes you towards a fairly inflexible style of gameplay (moving Fast or Very fast at nearly all times except when making a quick buck as a drover), as well as memorising various map features (for instance, the "get horses from seven wild herds in 14 days" mission is essentially impossible unless you both can move quickly and know exactly where to go beforehand). This is disappointing, because there's a lot more options than that given by the game (such as taking a small herd of animals to provide provisions) that are mostly ignored by the player since they slow you down and cause you to fail missions even if you know where to go.

- On a similar note, the fact you can take a handful of guards and stomp every bandit gang on the map renders the choice of fighting or parlaying a non-issue. It takes virtually no investment to make bandit gangs become wandering loot bags rather than any sort of threat to be avoided. They also still aggressively head after you on the map even when you outnumber them ten to one.

- Bribing towns that cannot possibly resist your army should be a lot cheaper (and maybe you should be able to demand provisions at the cost of losing faction affection, which certainly has some historical backing) than bribing armed and walled cities to let you in.

- Horses should require more upkeep. I can take a hundred horses through the middle of a desert with low provisions because I only have a handful of guards (they can also carry very high levels of provisions even when nearly every horse is mounted). This is problematic and make horses a no-brainer - the only reason not to have a caravan entirely with horses is because you can't afford it. Horses require much more water and better fodder than camels (and other animals like goats), especially if they can also take riders, and while the game mentions this it isn't reflected in gameplay at all as far as I can tell.

- Roving armies vanish when you load a game, if you've captured the citadel/fortress they spawned from. You can also just run away from them and they'll make no effort to retake the town you just captured. Both things make taking citadels/fortresses much easier since they're much harder to beat than the static defenders.

- I'm glad that the patch is adding the ability to "rest until morning" at a spot, and hope that comes to the Switch as well.

- There's a few odd green spots in the middle of otherwise impassible mountain ranges that bug me since there's seemingly no way to get to them (not meaning the ones you can get to by moving diagonally).

- Deserts are really too lucrative, as they're stuffed with abandoned caravans, people who give you stuff, camels and bandits. My Traveller was broke, headed out into the Takla Makan for like ten days and came out with twice the animals she went in with and tons of spices and silk. More like Sea of Goodies.

- When provisions run out, the caravan should be using their animals as provisions rather than starving to death despite being accompanied by twenty camels and ten horses or what have you (killing herd animals should also be an option when in low-food areas even before you run out of food entirely, much like halving rations). Also, when guards desert the caravan, they should probably attempt to steal animals or other goods (which might be mitigated by good Battle or Wayfaring skills). Ideally, you could also dump goods in order to move faster, although that might be difficult to add to the interface.

- When you're a laden caravan (especially with tons of spare mounts), somebody should always be willing to hire more guards. I wanted to try warfare with my rich Traveller after a few abortive attempts with the other scenarios, and nobody wanted to buy any guards (I had 15) even though I was running around with like 150 bolts of silk and had plenty of free mounts. I had to start a random war with a Kushan village before an advisor would allow me to buy troops, even though I had two Soldier advisors.

- The same bug (presumably) that prevented the "sacrifice horse" mission from completing for the Traveller in the Steam version of the game is also present on the Switch version, preventing the Traveller mission chain from being completed successfully.

Hi Chris,
Thanks for these notes! I'll bring them to the next meeting on the project.

I don't agree that deserts are too lucrative though - that is probably based on your experiences with the Traveller. You certainly can make a good return on a desert trip if you're lucky, but attempting any destiny other than the Traveller the deserts are a nightmare. One sandstorm can utterly destroy an attempt at the Rebel or the Warlord!

Think of the deserts as a lottery that you can win, but are not guaranteed to do so. In the Traveller, where caravans are small, they can work out. But as soon as you're dealing with 30, 50, or even 800 animals in your caravan, the deserts are NASTY. They scare me - and I made the game! :)

Many thanks for these notes,